Keeping Up with the Joneses: The Great Paint Debate 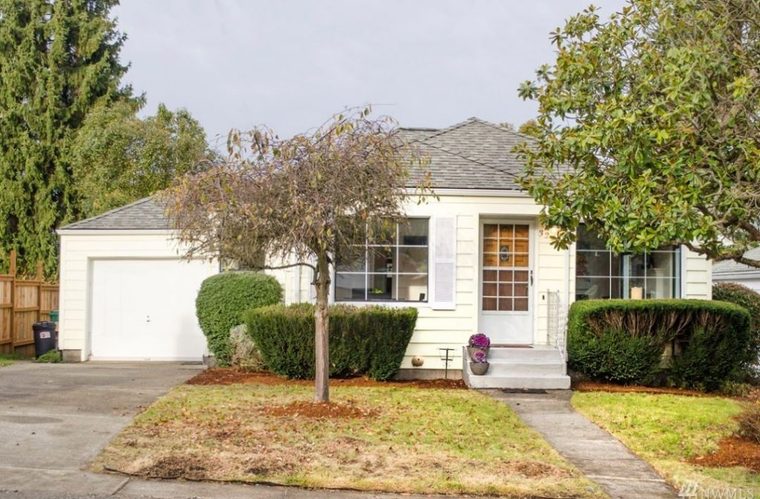 A few weeks back, Jenn and I decided to finally pull the trigger on painting our home. The vinyl siding of the 1942 Seattle Cape Cod fixer we purchased nine months ago had been sun bleached to the point of resembling a kind of soft lemon chiffon yellow you’d see on a cake your grandmother baked. Great for dessert, bad for today’s exterior home color.  We wanted a charming, warm and inviting new exterior home color but were fearful about what it would cost to have a professional do it. We had saved between 10-15k by renovating our bathroom ourselves.  Couldn’t we just pick up some paint and make a Saturday of it?

Pro tip: In Seattle, painting outside competes with the weather. Make sure you have a runway of at least a week of good weather to ensure you can paint the house in its entirety while leaving time for it to dry.

Seeing as the summer season was pretty much over (say it ain’t so!) and the wet Seattle fall was nearly upon us, we figured we had only a week or two left to get the job done. I’m the kind of person who jumps on a new project… and maybe sometimes I put the horse before the cart. *Cue Jenn’s pursed-lips smirk* So once Jenn and I agreed we were going through with the project, I had three different painters bid out the job and booked the least expensive (but experienced) professional within two days. I scheduled him to arrive the following day.

Good Husband Tip: Don’t give your wife 12 hours to decide what color to paint your house.

Pro Tip: Don’t feel bad about shopping for the best price with home professionals. They bid homes out every day and won’t be offended. Most of the time, they present a bid with room for negotiation. It never hurts to get a second bid or ask for a cheaper price.

With the pressure of our painter showing up the next day, we scarfed down dinner and took a trip to the paint store.  (I tried to convince my wife this was an opportunity for us to bond as a family unit.  “We could make it educational! Teach Addie about hues and shades!  C’mon, honey… it’ll be fun!” *Cue Jenn’s pursed-lips smirk*) We knew we had to get special paint for our vinyl siding so that narrowed it down to about 20 options.  And we wanted a sort of dark blue so we picked out two colors that looked promising and headed home to test them out.

Pro Tip: When testing paint, make sure you let it dry before you decide which color to go with.  Paint a few different swatches on various sides of the house and watch how it looks during different times of the day.

One test swatch (on the right, called “Prime Time”) was a little purplely/blue grey and the other was a slightly lighter blue (on the left, called “Stone Cold).  Those are two seriously stellar wrestler names, amiright?

With our painter arriving that evening, the pressure was on for us to choose. We’re Millennials so we did the only logical thing you can do when making a big decision. We asked our friends on Facebook. 76 comments later, there was still no clear answer.

Mid-debate, our dear friend Kim Gorsline of Kimberlee Marie Interior Design called us up with some highly insightful information.  First of all, a paint store has pre-mixed vinyl siding paint but they can actually make ANY color into vinyl siding paint.  Which means we had a lot more choices (which left me feeling excited and gave Jenn heartburn).  More importantly, Kim pointed out that the two options we had might not be exactly what we hoped for.  She suggested a few colors that had more grey tones and in much deeper shades.  She promised us that we’d still get the blue house of our dreams even if the colors looked dark grey on the swatches.

Pro tip: You can get small paper swatches for free or pay a few bucks for a large paper square but nothing will compare to a sample of real paint on your surface.  We spent $59.34 on paint samples and it was worth every penny.

Back to the paint store we went, grabbing three more options to test.  Our painter began taping off the trim as we took a few steps back to assess the swatches… BOOM! We had our answer… Britannia Blue by Benjamin Moore. Not the best wrestler name but a nice blue nonetheless.

We trust Kim’s vision and design talent wholeheartedly and as the days went on and the paint went up, we couldn’t have been more pleased.  I installed some new lights fixtures and house numbers that Jenn picked out.  Only this time, I gave her three days of lead time *Cue Jenn’s pursed-lips smirk*

Related Articles
Blog 6 Extreme Interior Paint Makeovers Today we’re looking at how paint has changed your rooms, from the kitchen to the bedroom, from the living room to the laundry room. Makeover 1: Stephanie Van Dyke, original photo on Houzz AFTER: Houzz user Stephanie Van Dyke’s newly dark living room walls. Makeover 2: Before Photo, original photo on Houzz BEFORE: Van Dyke wanted to switch up these […]
Housing Trends How Glass Design Can Help Reflect the Best of Your Home Glass has been a key component of home design for style and function for thousands of years. The versatility of glass is such that nearly every single modern home constructed utilizes glass in some way, shape, or form. But there’s no need to settle for simply including glass window panes and calling it good. Whether […]
Uncategorized Finding an Affordable Vacation Through a Home Exchange Summer is here, which means vacations are on the mind, but as always the cost can feel prohibitive. As folks take less and less time off work, people shortening their vacations, staying closer to home, or going nowhere at all for “staycations”. Another way to save money, while still getting away, is to leverage your […]